From WikiLetters
Jump to navigation Jump to search

Nutrient pollution from agricultural runoff has caused plagues of coral-eating Crown of Thorns Starfish (COTS), which are destroying the reef.

Fabricius et al. (2010)[1] used laboratory experiments to demonstrate that higher Chlorophyll A (Chl A) concentrations (due to phytoplankton) increase the survival rate of Crown of Thorns Starfish (COTS) larvae. Citing the work of Brodie et al. (2007)[2], who claim that Chl A concentrations are twice as high in the central region of the Great Barrier Reef GBR, which receives more agricultural runoff than in other regions, they propose that the higher Chl A concentrations in the central GBR trigger COTS outbreaks and thereby in due course reduce the coral cover. This is a central theme of the recent GBR Consensus Statement (Brodie et al., 2013[3]), which outlines the main arguments for how agricultural practices are damaging the reef. This hypothesis rests crucially upon the observation that Chl A concentrations are higher in the central GBR region than in the relatively pristine northern region. This observation, which is the work of Brodie et al. (2007)[2], will be the main subject of scrutiny in this letter. 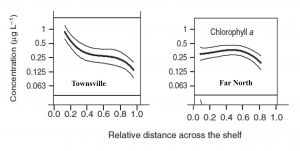 Figure 1: Chlorophyll concentration in the Townsville and Far Northern zones of the GBR (From Brodie et al., 2007). These plots use the relative distance across the shelf as the horizontal coordinate.

The hypothesis that COTS are destroying the GBR has been in and out of favour since the first COTS plagues were identified in the 1960’s in the pioneering days of marine biology on the GBR. From the start, it was claimed that these plagues were not natural, though the basis for this assumption was unclear. At first it was suggested that the COTS outbreaks were caused by overfishing of Triton shells, which are a known predator of adult COTS (Pearson and Endean, 1969[4]). A major outbreak of COTS in the early 1980’s, and the associated media attention, precipitated the AIMS long-term monitoring program, which documents the percentage of coral cover of over 214 Reefs.

Other work has disputed the hypothesis that COTS outbreaks are anthropogenically caused. By searching for COTS skeletal remains in sediment cores taken from reefs, Walbran et al. (1989)[5] have shown that COTS outbreaks have occurred continuously during the last few thousand years and that there is no evidence that they are more widespread today. There was some critical commentary about this work (e.g. Fabricius and Fabricius, 1992[6]), which was largely addressed by Henderson & Walbran (1992)[7], but curiously the original work by Henderson and Walbran (1992)[7] seems to have been almost forgotten and is very poorly taken into account, despite its great significance.

In the scientific literature, linking COTS outbreaks to nutrient pollution has occurred throughout the last decade. As it is certain that higher nutrient loads originate coming from river plumes, these indeed have the potential to cause enhanced phytoplankton (Chl A) concentrations, which in turn could influence COTS larval survival. However, the supposed duplicating of Chl A concentrations due to agricultural nutrient enrichment in the central GBR (Brodie et al., 2007)[2] is problematical for two reasons: 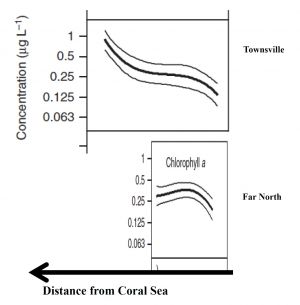 Figure 2: The far Northern data are scaled to take account that the Far Northern region is much wider than the Townsville region (From Brodie et al., 2007[2]). The graphs are aligned to match the positions of the boundary with the Coral Sea. It is notable that the Chl a concentrations are very similar in the north and Townsville regions (0.4 mg/l) for similar distances from the Coral Sea.

It is therefore difficult to accept the proposition that the doubling in phytoplankton concentrations could solely be a result from a minor increment in nutrient input from rivers into this well-flushed system.

One possible explanation to this paradox is that the assertion that the Chl A concentrations in the central GBR are double those of the other regions may be wrong, or is misrepresenting the fundamental differences that may exist between the various regions. Determining an average Chl A concentration for a region is not a trivial task, because it can depend on the proximity of the sampling sites to the open sea. Due to rapid flushing, sites close to the Coral Sea will have low Chl A concentration. The shelf width thus becomes a primary factor controlling Chl A concentration due to the less efficient flushing of wider shelves. The northern GBR is very narrow, at ca. 20 km at one of the transects used by Brodie et al. (2007)[2], in contrast to the central region which is ca. 100 km wide. It is notable that the central GBR displays a strong Chl A concentration gradient across the shelf, which is likely to be the result of the longer flushing times of the inner-shelf waters compared with the very short flushing times of the offshore water. The northern GBR shows no cross-shelf concentration gradient, possibly because the entire shelf is rapidly flushed, along with the lagoon. A simple average of the concentrations for the two regions that does not take account of the shelf-width difference, such as that apparently done by Brodie et al. (Figure 11) is fraught with danger (Figure 2) and further may prove to be not correct.

The reader may assume that such problems would have been taken into account in the sampling design and subsequent data analysis, but such optimism may be misplaced. There appears to have been no analysis of the data that related the distance of the Coral Sea to Chl A concentration. It would also be interesting to explore the influence of the sites located in the muddy inner-shelf embayments, which are well-represented in the central region, but entirely absent from the northern region dataset. Given the importance of this dataset, there is ample justification for reanalysis.

This is a very important data set which is being used to make public policy decisions. There is a prime facie case that the analysis and data have relevant issues and therefore there is a need to undertake careful reanalysis and to take supplementary measurements. The question is will this ever happen?